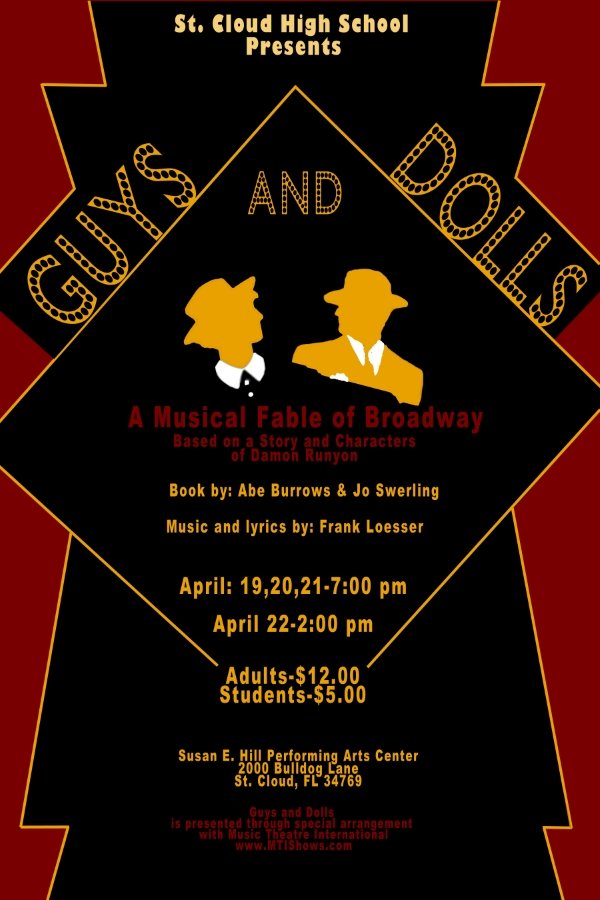 April 19-22, Saint Cloud hosted a show by the name of Guys and Dolls.          The show was fully acted out by students from Saint Cloud High School who auditioned to be part of the show. Guys and Dolls is a musical set in the Depression Era in New York City.     The story follows a couple of gamblers and the women who love them. It tells the overlapping stories of big shot gambler Sky Masterson, who falls in love with mission worker Sarah Brown and Nathan Detroit, engaged for 14 years to Miss Adelaide, who is a headliner at the Hot Box Club.     Nathan runs a floating crap game, a gambling game played with two dice, chiefly in North America. A throw of 7 or 11 is a winning throw, 2, 3, or 12 is a losing throw; any other throw must be repeated.     Throughout the plot of the play we see him on his quest to find a spot for the game, whileAdelaide continues to convince him to marry her. Meanwhile, believing he is no good, Sarah tries to fight her affections for Sky.     "This is a show you do not want to miss," said Jelissa Camacho, one of the main leads for the show. Guys and Dolls is set out to be a comedic musical and based off the judges' reviews of the show, the students did musical justice.     "I loved it," said Giselle Cruz. "You could tell everyone was committed and worked really hard on it which paid off because the show was great, " she said.     All the world may be a stage and all the men and women might be players, but for this theater team, all they need is each other.