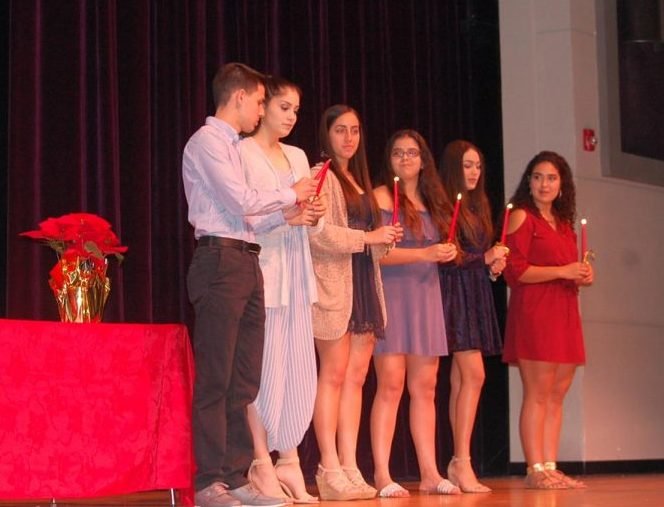 On Thursday, December 6 the Spanish honor society gave a warm welcome to the new students inducted to the society. This beautiful event was held at SCHS auditorium, were the sponsor of this event Mrs. Sanabria felt very proud of everyone and thankful of how far the students have come. The students selected for this event showed leadership skills. Inductees showed great enthusiasm and nervousness as their name was getting mention by the president of the Society Dyanne Velazquez. As candidates were called to stage, they had to light a candle which represented “inspiration” and “their career on life”. Officers: Dyanne Velazquez (President), Edil Ramirez (Vice-President), Franco Nazarian (Secretary), and Kathlyn Figueroa (Public relations) were holding out each of the Inductees certificates as they walked out of stage as the newest members of the Spanish Honor Society. Ramirez the vice-president of the society feels very honored and grateful for being there, he feels this experience for him was great, and what he learns in the society can be used later throughout life. “I would recommend this club to everyone so they can pursue a better career in life” said Ramirez.

To join the society, you must have a GPA of 3.0 or higher, student must be taking a Spanish class now and must have taken at least 2 years of Spanish.