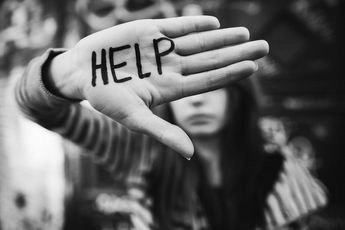 “Guess I’ll go jump off a cliff,” he says after forgetting to do his homework.

“I’ll just go throw myself off a building,” she announces after receiving her failing test grade.

“I’m going to kill myself,” she states after not making the team.

Most students are far too familiar with statements like these in their lives. We’ve become numb to the

idea of a teenager saying they plan to take their own life. How did it get to this point? How can the idea

of a child taking their own life not affect us?

college requires being a top-tier, well-rounded student -- in both an academic and an extracurricular

sense -- who stands out above their peers.

In a survey completed in 2013 by the University of Phoenix College of Education, high school teachers

reported assigning an average of three and a half hours of homework to their students each week. That

is 3.5 hours per week per teacher, folks!. In a week, we can spend around 24 hours exclusively doing

under a YEAR, only doing homework. What a waste of the “best years of our life”.

Students are killing themselves over stress. Our broken education system can push people to end their

life. Every one-hundred minutes a teenager takes their life. However, only 30% teenagers get help,

despite suicide being the third largest killer of teens today.

However, how do we expect students to respond with so few free hours in the day. It's no wonder stress

is such the killer that it is when days are so packed students can barely breathe.

For example, about 70% of students have a desire to go to college. Then not only is the increased

activities and the time spent in those now need to be factored into the schedule. A student going into

college need to consider these because it’s what allows them to be considered well rounded.

Depending on the student the time ranges from around an hour to four a day. We’re already over 24

hours and we haven't even thought about sleeping, eating, and the daily functions of living. And may I

remind you according to most adults, Gen Z is lazy.

Who knows, maybe it is the hormonal issue we continue to be told it is. However, its one that killing and

getting swept under the rug continually and shamed into silence. It’s thought that up to 50% of

American teens could be diagnosed with depression sometime in the school career. Which is what this

leads to. Teenagers and adults feeling shame for how they’re feeling. If more people were able to feel

safe getting help maybe, we would lose so many young lives.